The Dhilba Guuranda-Innes National Park can be found at the very tip of the Yorke Peninsula in South Australia. With gorgeous sandy beaches, rugged cliffs and plenty of wildlife, this park is a perfect place to spend a few days getting lost in nature.

I acknowledge the Narungga people, Traditional Custodians of the land which this post is about and pay my respects to their Elders past & present and extend that respect to all Aboriginal and Torres Strait Islander peoples today.

Innes National Park is filled with interesting places to visit. I spent 3 days exploring and they were action-packed! There were only a couple of things I didn’t see so you could cover everything easily in 4 days.

These are all the points of interest to visit in the Innes National Park:

Where to take photos-Innes National Park

The photo opportunities are plentiful in the Innes National Park. With parts of the coast facing different directions there are some great options for catching a fabulous sunset (or sunrise if you’re an early riser).

The turquoise waters have to be seen to be believed! The powerful waves are constantly sculpting the coast and forming sheer cliffs and fascinating rock formations.

The Cape Spencer Lighthouse was one of my favourite Innes National Park Photography spots offering spectacular cliffs on either side of the lighthouse.

West Cape Lookout is another top pick for photographers with the interesting metal lighthouse and a lookout with 360-degree views.

The cliffs at Pondalowie break were copping a battering from the waves when I visited making super impressive splashes that made for a great photo and don’t miss the Boat Wrecked on the beach at Pondalowie Bay.

The Investigator Strait is the stretch of water that lies between southern Yorke Peninsula and Kangaroo Island. Between 1849 and 1982, a total of 26 vessels are known to have been wrecked in these waters. The Investigator Strait Shipwreck Trail was established to showcase some of the more prominent shipwrecks in this area. Download a PDF guide here.

When choosing where to stay in the Innes National Park you have 3 main options:

Camping
The Innes National Park is so beautiful that you don’t want to leave. Well, you don’t have to if you choose to camp! There are 8 different campsites available which need to be prebooked ahead of time. All the info you need is here.

Marion Bay is right on the doorstep of Innes National Park and is a great place to stay when visiting the Yorke Peninsula. There is a big range of cabins available for rent. I stayed at Marion Bay Holiday Villas which was just $100 a night for a two-bedroom villa with all the necessities.

Inneston is a historic town which has abandoned buildings that have been restored back to their original charm where you can spend the night. Once a thriving mining town from 1913 to 1930 – today Inneston is a sleepy reminder of these bygone days. You can book your stay here.

When visiting the Innes National Park you will need to be pretty self-sufficient. You will find public bathrooms (long drop style) at the campgrounds and at the car park for the West Cape Lookout and there are a couple of BBQs available at the Pondalowie Campground & near Emu Beach.

A detailed map showing all facilities in the park can be found here.

There is only one rubbish & recycling station in the park which can be found near Stenhouse Bay. You will need to be prepared to take your waste and recycling with you so bring a couple of bags with you.

There is nowhere to buy food or drinks in the park so you will need to bring all your food with you. I stocked up on supplies before I left Adelaide which was lucky because the options are very slim in Marion Bay.

-There is one general store that had very basic food. I bought a packet of BBQ shapes and resisted buying a vegan Magnum which I was surprised to see there.
-One morning I ventured to Studio Surf which is the gallery and cafe of a local artist. The art was beautiful and I enjoyed a long black as soy milk was not an option.
– The Marion Bay Tavern has some vegan options on the menu is a really nice venue to mix with the locals and enjoy a beer after a hard days sightseeing.

If you are a coffee addict like me bring your own coffee making tools. I had my Aeropress so made my coffee to go each morning. A thermos would be a great idea to be able to make a warm cuppa throughout the day.

The National Park is home to many plants and animals and their habitat can be very delicate so always stay on the trails and be considerate around wildlife.

How to get around Innes National Park

Walk The Yorke is an initiative by the Yorke Peninsula Council to connect the entire Yorke Peninsula with a 500km walking trail. The section that includes the Innes National Park is Marion Bay to Gleesons Landing which stretches for 53.1km. Walkers & cyclists are exempt from park entrance fees but as the walk is over 13 hours if you wish to spend the night be sure to book in advance. Download a PDF trail map here.

If you are after a more leisurely walking option there are some shorter trails.

Cycling is a great option for seeing Innes National Park. There is not an option for hiring a bike near the park so you will need to have your own bike or hire elsewhere.

I visited the park with a car and it was easy to get around and see all the sights. The maximum speed in the park is 60km/h and in some places it’s 40km/h. Be cautious of the wildlife. I saw many emus and kangaroos right near the road. Further into the park, near Pondalowie, the road changed from sealed to unsealed. It is safe to drive with a 2WD but if you are planning to rent a car for your visit be aware that many car rental companies will not allow you to drive on unsealed roads.

If you plan to enter the park with a car you need to pay for vehicle entry. Day entry into the Innes National Park provides access to all available areas including walking trails, picnic grounds and day visitor areas. Campers only need to purchase an entry ticket once for the duration of your stay.

Innes National Park is a haven for birdlife. The most impressive bird has to be the emu which I saw plenty of during my 3 days in the park and I was lucky to see an emu with 5 tiny chicks on the side of the road.

Check out this guide to birds in Innes National Park.

The only mammal I encountered was the Western Grey Kangaroo of which I saw many! There are some other mammals in the park which you may be lucky enough to spot:

The Tammar wallaby was once widespread across the Yorke Peninsula but became extinct on the Australian mainland by the 1920s. They were reintroduced to the Innes National Park, in 2004 which now has a growing population of healthy tammar wallabies.

I visited during winter so there wasn’t any reptile activity but in warmer weather you might have more luck.

I didn’t see much in the way of interesting insects but I have one warning: kangaroo ticks. I saw a warning for this pest at one of the public bathrooms which totally gave me the creeps. If you camp in the park be sure to check your self for ticks as they aren’t fussy and will happily find a new home on a human.

Marna Banggara is an environmental project to create a safe haven for native species. A 25km fence will be constructed in the lower end of the Yorke Peninsula encapsulating 130,000 ha, with plans to construct a second fence in year 10 (enclosing 170,000 ha). With the area closed off, measures can be put in place to reduce the populations of foxes, cats and mice and allow the native species to thrive.

There are plans to reintroduce a number of species which once were abundant in the area but became extinct due to land-clearing, farming and feral pests. Brush-tailed Bettongs (Woylie), Southern Brown Bandicoots, Red-tailed Phascogales and Western Quolls are planned for reintroduction. The project should also help boost the Peninsula’s population of Barn Owls which will help manage the mouse population.

You can learn more about this project here.

Disclosure: This post may contain some affiliate links, meaning that if you click one and purchase/book something, at no additional cost to you, I will earn a little commission. 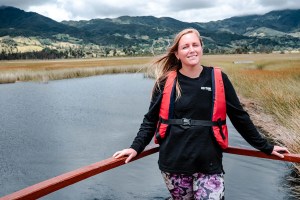 Nature lover and photographer. You can find me climbing mountains or in the bushes trying to get the perfect shot of a cute bird.